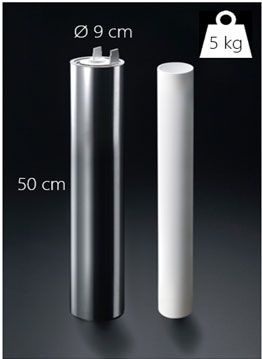 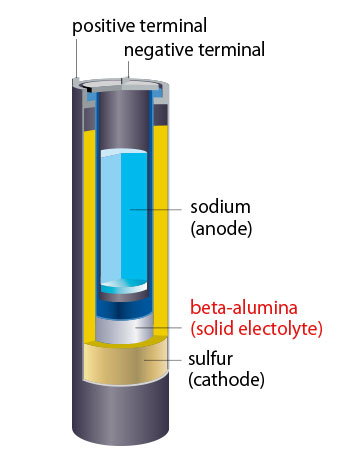 NGK's NAS batteries are large-capacity batteries with many power grid applications.
Superior function and performance possible only from decades of research, design, testing, demonstration, advanced manufacturing and over 15 years of proven commercial operation.

NAS batteries are the most effective way to store large amounts of electrical energy discharging for six hours at rated output.

NAS batteries make 24/7 power supply feasible with solar power for 6-10 hours and a NAS battery for 14-18 hours at one-third of the rated output.

When used with a fastPower Conversion System(PCS), NAS systems can respond to grid commands to store or deliver electrical energy in tens of milliseconds.

NAS batteries can be flexibly deployed in smaller spaces than other battery technologies.

With decades of experience, NAS batteries have field-proven reliability exceeding 99%.

The safety of NAS batteries has been proven in testing by NGK and third-party authorities and from extensive field experience.

Development of NAS technology by NGK started in 1984 to provide a more flexible energy storage alternative than pumped energy storage, for the world's largest utility, TEPCO. The first NAS battery system deployment was in 1995.

NAS battery systems can be cascaded to any needed size (to 100s of MW or more).

Preventative maintenance is minimal and can be scheduled to avoid peak seasons. Maintenance can be done on partical systems while the rest of the system continues operation.

Climates for NAS projects range from the cold of Canadian winters to the heat of Abu Dhabi.

NAS batteries are rated at 4,500 full cycle discharges, or a 15-year calendar life, whichever occurs first. This lifetime is field-proven.

Major Advantages of NAS over other battery technologies

NAS battery has a calendar life of 15 years and a full charge/discharge durability of 4500 cycles.Since the active materials of the NAS battery are in molten states, there are no transition between solid and liquid due to charge and discharge, and there is no side reaction, so long life can be expected.

NAS battery, which operates at 300-340 degree C. in a thermal enclosure, satisfies optimal operating conditions without air conditioning in cold and hot areas.

Please fill in this form to get in touch with us.